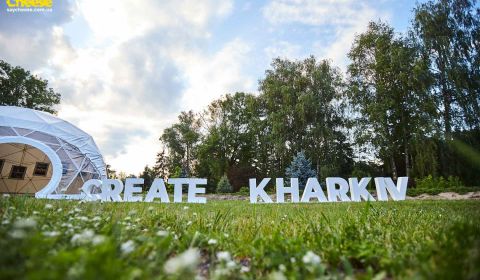 Aleksandr Yaroslavskyi’s Ecopolis HTZ new generation business park of DCH group will take part in the creation of a creative industries cluster. The signing of a relevant memorandum became one of the central events of the large-scale city festival "Create Kharkiv Summer Fest 2020" business program (one of the key partners of DCH group).

“Our mission is to draw attention to creative industries and sign a memorandum of intent for the basic creative industries in Kharkiv. I want to express my deep gratitude to Vil Bakirov. I would like to thanks to DCH of Aleksandr Yaroslavskyi. They not only support our initiatives but also help to implement a creative industries cluster. There are several negotiations on how to create interesting iconic places in the city. Ecopolis HTZ can act as a driver of the process,” said Victoriia Gretskaya-Mirgorodskaya during the ceremony as a signatory to the memorandum on behalf of the city.

“The development of creative industries is a powerful driver of growth in the new economic structure. The specialized cluster in the framework of the creation of Ecopolis HTZ business park will become the epicentre of creativity and inspiration. By combining a person’s passion for creativity and DCH resources, we together with representatives of the creative community can influence the development of a modern urban innovation culture, create a truly innovative ecosystem that will help ensure intra-industry interaction and commercialization of creative projects. Many representatives of creative industries in Ukraine work for export, and the creation of such ecosystem will help to keep talented people in Ukraine, creating the right conditions for them,” Vitaliy Barannikov, Director of Management Company of Ecopolis HTZ business park, said about the emergence of the cluster.

“Creative industries are changing our planet in the 21st century. Creative industries enable you to earn using your talent and creativity. Talent is a necessary but insufficient condition. Additional conditions are needed for a creative industry to work effectively. We need a strong and new modern management, investments, infrastructure, networks, organization, a lot of things are needed. We will combine the joint efforts of the education system, business and government, in the cluster” commented Vil Bakirov, Rector of N.V. Karazin Kharkiv National University, on the signing of the document.

DCH group owned by Aleksandr Yaroslavskyi pays considerable attention to the development of the cultural environment and infrastructure of Kharkiv as one of the largest megacities of Ukraine. Largely thanks to the efforts and investments of Yaroslavskyi, the city gained its modern look and was transformed in the process of preparing Kharkiv for Euro 2012. The central infrastructure facilities of the first capital of Ukraine were created by the businessman – the Metalist Stadium, Kharkiv International Airport and Kharkiv Palace 5*, one of the best luxury hotels in Eastern Europe, are the results of his investments.

Ecopolis HTZ High Tech Business Park is a long-term investment project of Aleksandr Yaroslavskyi’s DCH group. Ecopolis HTZ business park will be located on the idle production facilities of the Kharkiv Tractor Plant (KhTZ) known in the world since Soviet times, which will become the anchor resident of the industrial cluster. Redevelopment of an area of about 150 hectares involves the construction of more than 500 thousand square meters of office, warehouse, industrial and other premises. The planned investment in the development of Ecopolis HTZ business, technological, industrial and research ecosystem will reach about $1 billion by 2033. The implementation of this project will create at least 10 thousand modern jobs. The business park will include an industrial park, a technological park (IT and R & D clusters), a logistics complex with an e-commerce distribution centre, an agrotechnological and trade cluster, a medical and educational centre. Ecopolis HTZ is one of the key projects in the development strategy of the city of Kharkiv for 2020-2030.