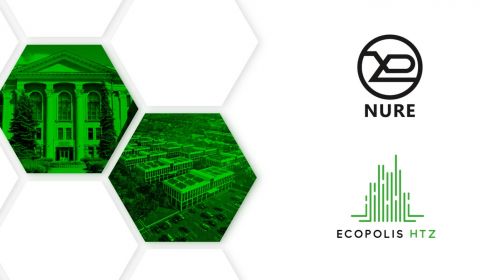 The management company of the high-tech business park Ecopolis HTZ owned by Aleksandr Yaroslavskyi entered into the Memorandum of Cooperation with the Kharkiv National University of Radio Electronics (KNURE). The Memorandum provides for the creation of a research centre (R&D), the development and adaptation of technologies in the education field, as well as the attraction of foreign residents to the Ecopolis HTZ, including institutions of higher and business education.

At the signing ceremony, Vitaliy Barannikov, General Director of the Ecopolis HTZ management company, highlighted, ‘The Kharkiv National University of Radio Electronics is one of the few universities in the country engaged in professional training for the IT industry. And that is why the Memorandum signed today defines the goals and directions we will jointly implement in the process of creating an IT cluster based on the Ecopolis HTZ business park.’

‘I hope we will be able to jointly implement the IT developments of the university at the site of the Ecopolis HTZ business park. We have got the potential. Both students and tutors,’ Professor Valeriy Semenets, the Rector of KNURE, commented on the signing of the Memorandum.

Now more than 8,000 students are studying at KNURE, including about 600 international students from almost 40 countries of the world. The University is a long-standing partner in joint projects within the framework of international grant programs of the European Union (Erasmus+, Horizon 2020), the United Nations Development Program, the British Council of NATO. KNURE is included in the world and European ratings of educational institutions.

In addition to educational, scientific and technological centres, Ecopolis HTZ business park signed Memorandums with manufacturers and developers such as the global IT giant Hewlett Packard Enterprise, the developer of equipment and solutions in the telecom sector ZTE corporation, and with the Kharkiv city cluster of Information Technologies (Kharkiv IT-cluster). Negotiations with other global technology leaders are underway. The project is supported by leading international consultants; investment and industrial company Tus-Holdings, which manages dozens of similar business ecosystems, production and research platforms, will take part in its development.

The business park of high technologies Ecopolis HTZ of the DCH group owned by Aleksandr Yaroslavskyi became the basis for the national project to create a ‘Ukrainian Silicon Valley’ in Kharkiv. It was initiated by Volodymyr Zelenskyi, the President of Ukraine.

Ecopolis HTZ is located on the territory of the Kharkiv Tractor Plant. The rational use and deep redevelopment of the plant’s territory will create a world-class innovation ecosystem for business development and research. The planned volume of investments in the development of the project is $1 billion. Thanks to the development of an industrial park, an IT cluster, a medical centre, a logistics complex, trade and agro-technological clusters, as well as research (R&D) and educational centres, the project will stimulate the creation of at least 10,000 modern jobs.

The creation of the ‘Ukrainian Silicon Valley’ in Kharkiv is one of the priority areas of the city’s development strategy until 2030.