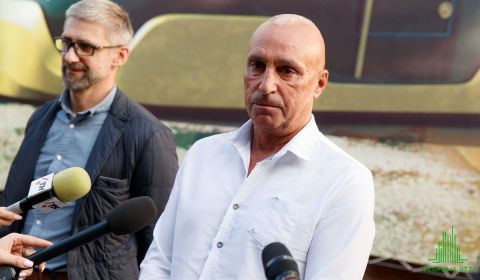 DCH group owned by Aleksandr Yaroslavskyi’s completed preparatory work and began organizing the manufacture of modern Ukrainian trams in Ecopolis HTZ in Kharkiv. Today the production site was shown to journalists. As previously reported, this is a joint project of the local authorities of Kharkiv and DCH, and Ecopolis HTZ is among the priority projects of the city development strategy, SQ reports.

‘I am a supporter of concrete steps as everyone could see on the example of EURO 2012. When the hotel was built, the airport and the stadium were renovated. The EURO is over, and people today, years later, use everything. What man has done, man can do. The city, represented by Hennadiy Kernes and Igor Terekhov, turned to me with such a request about the idea of tram manufacture. I have supported it. Everyone will soon know about our new Kharkiv tram,’ said Aleksandr Yaroslavskyi, the owner and president of DCH, at the opening of the production site.

Igor Terekhov, the First Deputy Mayor of Kharkiv, described the project as follows, ‘The project for the production of new trams would not have been realized without the energy of Aleksandr Yaroslavskyi and the tenacity of Hennadiy Kernes. And this is the development of the Kharkiv industry and care for the environment because the tram is the most environmentally friendly mean of transport. And it is also the mega-development of public transport and care for our citizens who use it.’

The work on organizing the tram production began with the creation of the necessary technical documentation. ‘We are now at the territory of the future workshop, where the production of modern trams will be opened. There is a lot of renovation work ahead; it is not a problem. The production will be complex – design-build-release. Our tram should be better than European models in terms of price and quality. We plan to start serial production in 1.5-2 years,’ said Andriy Koval, General Director of the Kharkiv Tractor Plant, where production will be organized.

According to DCH, Aleksandr Yaroslavskyi plans to invest about EUR 5.5 million in the production of modern low-floor trams. Engineering and consulting support of the project will be provided by foreign partners from the Czech Republic.

‘The tram production will become the first resident of the industrial part of the Ecopolis HTZ business park in addition to the Kharkiv Tractor Plant itself. Besides, we have many global technology companies that we are preparing to partner with. For example, today, we signed a memorandum with Hewlett Packard Enterprise. We are completely open in our work for our partners,’ said Vitaliy Barannikov, Director of the Management Company Ecopolis HTZ.

According to experts, the rolling stock of tram transport in 14 Ukrainian cities using this type of transportation is seriously worn out. More than 90% of cars are over 20 years old, more than 50% of them require urgent replacement. Ukraine does not have its production of tram equipment; the country’s demand is covered by second-hand cars.

Ecopolis HTZ is a long-term investment project of the DCH group of Aleksandr Yaroslavskyi, which implies a deep redevelopment of the territory of the legendary Kharkiv Tractor Plant (KhTZ). It will create a fundamentally new world-class innovative business ecosystem for the development of high-tech manufacturing, business, and research. The planned volume of investments by 2033 will amount to more than $ 1 billion. The national project Ukrainian Silicon Valley, initiated by President of Ukraine Volodymyr Zelenskyi, is being implemented based on Ecopolis HTZ.